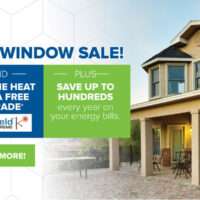 Apron: Inside flat trim member which is used under the stool at the bottom of the window.

Astragal: The center member of a double door, which is attached to the fixed or inactive door panel.

Bay window: A composite of three or more windows, usually made up of a large center unit and two flanking units at 30- or 45-degree angles to the wall.

Bow window: A composite of four or more window units in a radial or bow formation.

Brick mould: Outside casing around window to cover jambs and through which nails are driven to install the window.

Casing:  Inside casing is a flat, decorative molding which covers the inside edge of the jambs and the rough openings between the window unit and the wall.  Outside casing (or Brick Mould) serves the same purpose, while it also is an installation device through which nails are driven to install the window unit into the wall.

Circlehead: A generic term referring to any of a variety of window units with one or more curved frame members, often used over another window or door opening.

Clerestory: A window near the top of an outside wall.

Cottage double-hung: A double-hung window in which the upper sash is shorter that the lower sash.

Cripples: The short 2 x 4 members used to frame under the sill or above the header in a rough opening for a window in a frame wall.

Curb: A watertight wall or frame used to raise slope glazing above the surface of the roof as a preventive measure against water leakage from melting snow or rain run-off.

Dormer: A space which protrudes from the roof, usually including one or more windows.

Double rafter: The doubling (side by side) of the roof members to reinforce an opening in the roof for a slope glazing installation.

Double glazing: Use of two panes of glass in a window to increase energy efficiency and provide other performance benefits.

Drip cap: A molding placed on the top of the head brickmould or casing of a window frame.

Fenestration: An architectural term referring to the arrangement of windows in a wall.

Finger-jointing: A means of joining individual pieces of wood together to form longer lengths.  The ends of the pieces are machined to form a set of interlocking fingers, which are then coated with adhesive and meshed together under pressure.

Flashing: A metal or plastic strip attached to the outside of the head or side jambs to provide a weather barrier, preventing leakage between the frame and the wall.

French hinged door: Hinged doors which have wider panel members around the glass.

French sliding door: A sliding door which has wider panel members around the glass, giving  the appearance of a French hinged door.

Glazing: The glass panes or lights in the sash of a window.  Also the act of installing lights of glass in a window sash.

Glazing bead: A plastic or wood strip applied to the window sash around the perimeter of the glass on the outside to hold the glass in place.

Glazing compound: A pliable substance applied between the window sash and the lights of glass to seal against the elements and sometimes to adhere the glass to the sash.

Glazing stop: The part of the sash or door panel which holds the glass in place.

Head: The main horizontal member forming the top of the window or door frame.

Head board: A flat board cut to fit the contour of a bow or bay window and installed between the head jambs and the flat wall surface to finish off that area which would normally be ceiling.

Header: A heavy beam extended across the top of the rough opening to prevent the weight of wall or roof from resting on the window frame.

Hopper: A window with a top sash that swings inward.

Jack stud: Framing members, generally 2 x 4’s, which form the inside of the window or door rough opening.  They run from the sole plate to the header, which is supported by them.

Jamb liner: Metal or plastic covering the inside surface and head jambs of sliding windows.

Keeper: The protruding, hook-shaped part of a casement window lock, which is mounted on the inside surface of the sash stile.

Lift: A handle or grip installed on the bottom rail of the lower sash of a double-hung window to make it easier to raise or lower the sash.

Light shaft: An insulated shaft built to direct the light from a roof window or skylight through the attic to the room below.

Low-E glass: A common term used to refer to glass which has low emissivity due to a film or metallic coating on the glass or suspended between the two lights of glass to restrict the passage of radiant heat.

Masonry openings: The opening in a masonry wall to accept a window or door unit, the same as a rough opening in a frame wall.

Mortise: A slot or rectangular cavity cut into a piece of wood to receive another part.

Mortise-and-tenon: A strong wood joint made by fitting together a mortise in on board and a matching projecting member (tenon) in the other.

Mullion: The vertical or horizontal divisions or joints between single windows in a multiple window unit.

Mullion casing: An interior or exterior casing member to cover the mullion joint between single windows.

Muntin: A short bar used to separate glass in a sash into multiple lights.  Also called a windowpane divider or a grille.

Operator: A metal arm and gear which allows for easy operation or closing of projecting windows.

Outer frame member: The exterior protruding portion of a window frame which has no exterior casing.

Palladian window: A large, arch-top window flanked by smaller windows on each side.

Panel: Usually refers to the separate panel or panels in a door frame.

Passive solar collector: Any glazed area in the walls or roof of a building pointed to the south to take maximum advantage of the sun’s heat without a mechanical (or active) method or storage or distribution of the heat.

Picture frame casing: The use of casing on all four sides of the interior of a window, replacing the stool and apron at the sill.  Also known as full-bound casing.

Pitch: The pitch of a roof is the degree of the inclination upward from horizontal or flat.  It may be expressed in degrees or as the ratio of the number of inches it rises in each 12 inches of horizontal span: 4/12 means the roof rises 4″ in every foot of horizontal span.

Pivot: A mode of operation for ventilating windows which generally means the sash pivots on a central axis and turns 90 or more degrees.

Rafter: Structural members of a roof which support the roof load and run from the ridge to the eaves (overhang).

Rails: The horizontal members of a window sash or door panel.

Rough opening: The opening left in a frame wall to receive a window or door unit.

Rough sill: The horizontal framing member, usually a 2 x 4, which forms the bottom of the rough opening.  It is toe-nailed into the jack studs and is supported by cripples.

Sash balance: A system of weights, cords, and/or coiled springs which assist in raising double-hung sash and tend to keep the sash in any placed position by counterbalancing the weight of the sash.

Sash cord: In double-hung windows, the rope or chain which attaches the sash to the counter balance.

Sash lock: Generally, a cam-action type lock applied to the check rails of a sliding window or at the open edges of a projecting window to pull the check rails tightly together or to seal the sash tightly to the frame, both for security and weather-tightness.

Sash weights: In older double-hung windows, the concealed cast-iron weights which are used to counterbalance the sash.

Seat board: A flat board cut to fit the contour of a bow or bay window and installed between the sills and the flat wall surface, providing a seat or shelf space.

Shims: Wood wedges (often wood shingles) used to secure the window or door unit in the rough or masonry opening in a square, level and plumb position during and after installation.

Side lights: Tall, narrow, fixed or operating sash on either or both sides of a door to light an entryway or vestibule.

Sill: Horizontal member that forms the bottom of a window frame.

Sill course (soldier course): The row of brick, cement blocks or stones laid across the bottom of a masonry opening which lie under the outside edge of the window sill.

Simulated divided light: A method of constructing windows in which muntins are affixed to the inside and outside of a panel of insulating glass to simulate the look of true divided light.

Single glazing: Use of single panes of glass in a window.  Not as energy-efficient as double glazing.

Single-hung: A double-hung type of window in which the top sash is fixed or inoperable.

Slope glazing: Any glazed opening in a sloped roof or wall, such as a stationary skylight or fully operable roof window.

Solar gain: The process of providing a net heat gain within a structure, over and above the normal heat loss, by passive collection of the sun’s heat through windows and other glazed areas.

Sole plate: The bottom horizontal member in a frame wall.  Usually either single or double 2 x 4’s.  It is nailed to the deck or rough floor and the studs are nailed into it.

Stile: The vertical side member of a window sash or door panel.

Stool:  Inside horizontal trim member of a window sash or door panel.

Stop: A wood trim member nailed to the window frame to hold, position or separate window parts.  The stop is often molded into the jamb liners on sliding windows.

Stud: Vertical wood framing members which form a frame wall.  In normal construction these are 2 x 4’s about 8′ long.

Tenon: A rectangular projection cut out of a piece of wood for insertion into a mortise.

Transom:  A smaller window above a door or another window.  A transom joint is also the horizontal joining area between two window units which are stacked one on top of the other.

True divided light: A term which refers to windows in which multiple individual panes of glass or lights are assembled in the sash using muntins.

U-value: A measure of heat transmission through a wall or window.  The lower the U-value, the better the insulating value.

Unison lock: A casement locking system which secures the window at two locking points by operation of one handle.

Vapor barrier: A watertight material used to prevent the passage of moisture into or through floors, walls, and ceilings.

Venting unit: A window or door unit that opens or operates.

Windload: Force exerted on a surface by moving air.

*Tax based on materials only. For all orders: On approved credit, not all applicants will qualify. New customers only. Cannot be combined with any other offers. Some restrictions apply. Offer Expires 06/30/2022.