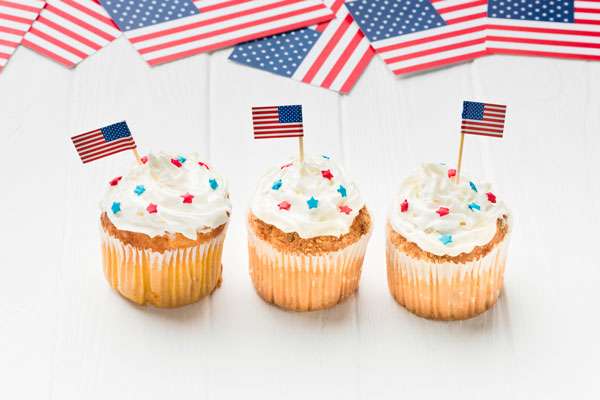 As our nation approaches its 237th birthday, millions will be celebrating in grand fashion with family, friends, neighbors and perhaps some new acquaintances as well. No matter where you are, the chances of seeing an organized and explosive display of fireworks are in your favor. From San Diego to Augusta—and from South Beach to Seattle—many of America’s favorite pastimes will be taking place in backyards and county fairs across the country. Traditional activities mixed with some new ones are all part of living in the land of the free, where the festivities abound with food and fun for everyone.

With so many fun and exciting things to do, it may be difficult to decide where to begin. While beach-goers head for the coast, picnics and backyard barbeque fares will offer some tantalizing entrees and side dishes. Barbequed burgers, dogs, chicken, tofu, potato salad and Cole slaw will be sitting right next to the ice chest filled with a variety of cold beverages, which is already making me hungry!

America’s campgrounds will also be alive and thriving, while many major league baseball games often conclude with dynamic fireworks shows that brilliantly light up the night sky. Amusement parks across the country will also be celebrating America’s birthday via roller-coaster rides and other attractions, as well as a number of traveling carnivals, some of which have the best cotton candy ever!

Those fortunate enough to have four-day weekends will be given more opportunities to officially kick off the summer with a variety of family vacations, or staying in town to catch the local events isn’t a bad idea either.

Visiting Southern California for the holiday may present even more of a problem, mainly because there’s so much to do. The City of Angels has too many events going on at once to catch them all. Even the folks who live in the vicinity find it difficult to squeeze everything in. Whether bicycling, skating, or people-watching on the boardwalk, the backdrop fits in nicely with a variety of shops that are merely a stone’s throw from the Santa Monica Pier.

No matter what you do on Independence Day this year, always remember to proceed with caution when dealing with fireworks, and try not to eat too much! From all of us here at American Vision Windows, have a happy and safe 4th of July!

*Promo period until 2024 with no payments required followed by 84 amortized payments based on the balance at the end of the promo period. Interest charge to account is waived if entire purchase balance is paid before the end of the promo period. No prepayment penalty. APR in loan agreement is fixed for the life of the loan. Minimum financing of $2,500 and proof of income required. For all offers: On approved credit, not all applicants will qualify. New customers only. Cannot be combined with any other offers. Some restrictions apply. Call for details. Offer Expires 02/28/2023.

You will receive emails, and text messages periodically and can opt-out at any time. Calls are recorded.